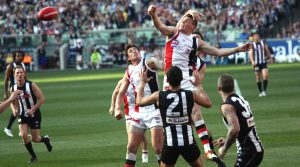 The league comprises 17 teams which play 24 home and away rounds between late March and late August or early September. This is followed by a four-week finals series which culminates in two teams playing off for the Premiership, in the Grand Final.

There is also a pre-premiership-season Cup competition played between the 17 teams in the AFL in February/March, where teams that win go through to the next round and teams that lose play practice matches until the competition is finished. The current sponsor is National Australia Bank.